Flags for display at the home or business are normally available from local businesses. Post 8463 also has access to other sources that can provide a wider assortment of sizes and quality than may be immediately available locally. For detailed information, contact the Post Adjutant.

Since September 11, 2001, many homes and businesses have been displaying the Flag on a daily basis and, in some cases, for 24 hours a day. When the Flag is flown for 24 hours, it should be illuminated so that it is not in complete darkness.

Note: It is not necessary that there be a spotlight on the Flag. Frequently, the light from the street lamps, or lights that are on in the vicinity during hours of darkness, provide sufficient illumination so that the red and white stripes and the blue field can be distinguished.

Flags that have become worn or faded due to outdoor display should receive proper disposal. This is normally accomplished by burning the Flag in a fire so that it is completely consumed. Post 8463 will conduct Flag retirements from time to time, and will accept worn and faded Flags from the general public to be included in the next event. Boy Scout troops also conduct such Flag retirements and will also normally accept Flags from the public. 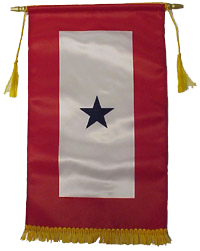 This banner is flown by family members to show pride in a Service Member serving in the military service. The Post can obtain the banner and send it to the family. Requests are accepted from a family member or a servicemember. A donation of $10 is requested to cover the cost of purchase and mailing. There is also a banner with two blue stars if more than one family member is serving. Send requests for the banner to the Post Adjutant, and include the mailing address.

Note: The Post can also obtain and provide the family with the Gold Star Service Banner when this is appropriate. See following article on history of this banner.

History of the Blue Star Banner

The history of the Blue Star Banner leads us back to World War I and Army Captain Robert. L Queissner. Captain Queissner designed this service flag to represent his two sons which were serving on the front line during this war. The Blue Star Banner became an unofficial way to show that your family had a child in the services. Over time the flag has transitioned to simply represent any family member who is serving in the Armed Forces at a time of war or hostility.

In 1918 President Wilson added, from a suggestion by the Women’s Committee of the Council of National Defense, that if the family member was lost while serving that the blue star was to be covered with a GOLD STAR. The blue would be symbolic of hope and the gold would symbolize sacrifice for freedom. In World War II the Blue Star Banner became very popular and could be seen in almost every window in which it was applicable.

The Banner is traditionally hung in the window of a home as to allow all who pass the residence to view it and know the family has a member at war. It is known that only immediate family members of the person serving in the United States Armed Forces are to display the flag. The list of expectable relation includes: grandparents, wife, husband, mother, father, step parent, adopted parent, foster parent, child, stepchild, adopted child, brothers, sisters, and half brothers and sisters. In 2001 on the historic day of 9/11, this flag became an official representation for a family to display to symbolize a serving member in the Armed Forces and was to be hung through the duration of a period of war or hostility.

Flag Retirement: How to Properly Retire an American Flag. The United States Flag Code, Title 4, Section 8k states-“The flag, when it is in such condition that it is no longer a fitting emblem of display, should be destroyed in a dignified way, preferably by burning.”

We have a Flag Drop off Box located on the South side of VFW Post 8463 Building where you can leave your flag.  It will be properly prepared in a dignified way by burning.

Also a flag retirement box was recently installed outside of City Hall, which is located 1015 Cultural Park Boulevard. Residents can drop their old American flags in the box for proper retirement without having to leave their vehicles. Flags also can be taken to any fire station in the City.